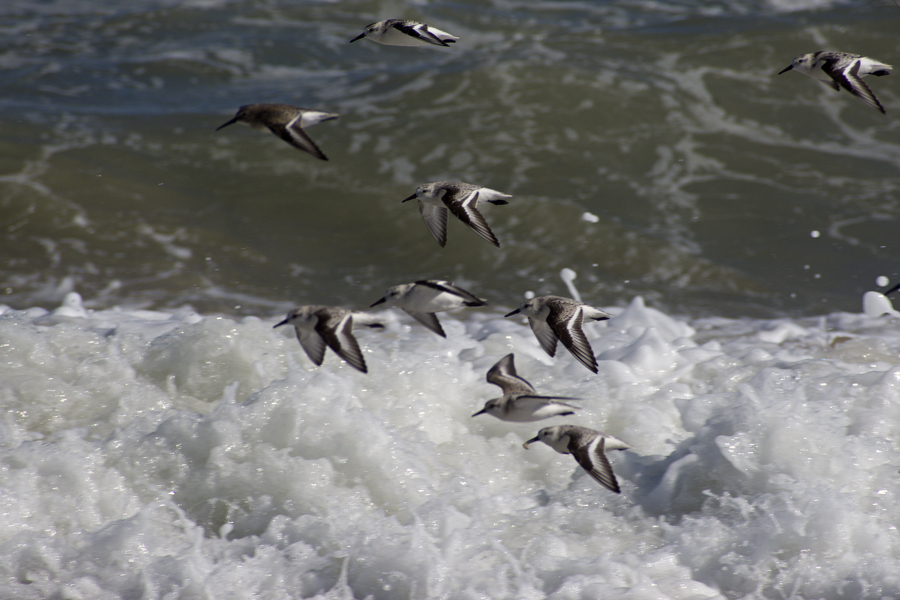 Fall came rolling in with a a gust of rain and a lot of wind last night. Yesterday was a perfect Indian Summer day. Today there is no doubt it’s fall on the Outer Banks.

The wind has been strong from the north all day. Bright sunshine with just a few puffy clouds on the horizon but the temperature struggled to make in to the mid 60s.

It was a great day to take a walk on the beach.

Sure, the wind was blowing hard from the north, but to feel that fresh air coming from the sea, the ocean waves white and frothing and all of it under a deep blue sky—all of it a reminder of how great it is to be on the Outer Banks.

The seabirds were out in force. Not at first, or at least they were not seen at first, but soon enough the laughing gull and lesser black-backed gulls were everywhere. Twenty-five or 30 yards offshore, a brown pelican skimmed the surface at the base of a wave, probably to get out of the wind. And sure enough, sanderlings were everywhere, their little legs sprinting away from incoming waves, followed by frantic pecking at the sand in search of a meal.

Startled they suddenly take fight, a dozen of them or so, seeming to leap into the air and dart off the north.

Out beyond the surf zone there’s a kitesurfer taking advantage of the wind. Every once in a while, the waves die down or the kitesurfer gets close enough to the beach to see the water fan out in a sheet as he skims the surface.

There are a lot of anglers hoping for a bite. The weather favors being outside, but surf conditions don’t seem ideal for landing anything. But when things calm down a bit, maybe some blues or sea trout…certainly mullet…something will certainly be there.

Fall is such special time on the Outer Banks. Don’t miss out. Plan your autumn stay with Brindley Beach Vacations.