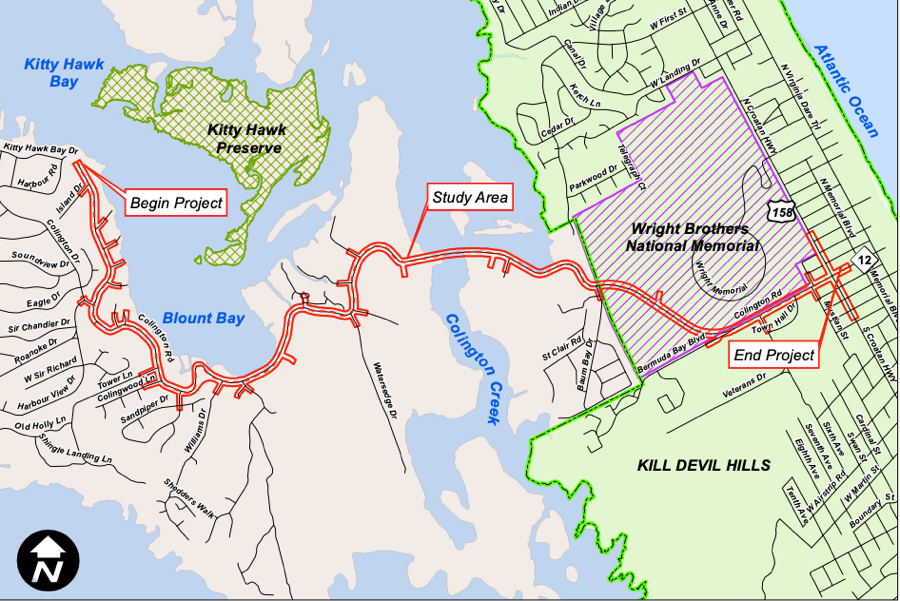 At long last it looks as though Colington Road is going to get a much needed facelift. The twisting two lane street  runs from US158 to the west end of Colington Island.

There is a certain rustic feel to driving the road, but it does need to be improved.

When it’s dry it’s a fun road to drive. It twists, it turns, it crosses marsh and tidal creeks and passes a beautiful open bay. It’s actually quite nice when the weather is agreeable.

The problem is, when it rain, it floods in certain areas regularly. With the right winds…it floods. And there’s little to no shoulder for much of the road.

If thing go as NCDOT hopes, construction on improving the road should begin very soon. It’s a good sized project, coming in at $20.

The contract calls for work to begin as early as February. The contract schedule requires most work to be coupled by the fall of 2023 with final touches completed by 2024.

According to NCDOT the work will substantially change the road. Included in the work will be wider lanes and bike lanes along the shoulders—right now it’s death defying to ride along the road. One of the most significant improvements will be raising the roadbed in flood probe area.

That will be particularly important at Blount Bay. The road, as it parallels the water there, is low to the water and flooding at that part of the road has trapped residents and renters in Colington for one or two days at times.

Some of the more challenging curves will also be smoothed out. Probably a good idea, but it does take some of the fun of driving the road away.

Turn lanes will also be included at key intersections.

Things seem like they’re always getting getter on the Outer Banks. Stop by and check out the progress for yourself when staying in a Brindley Beach Vacations home.