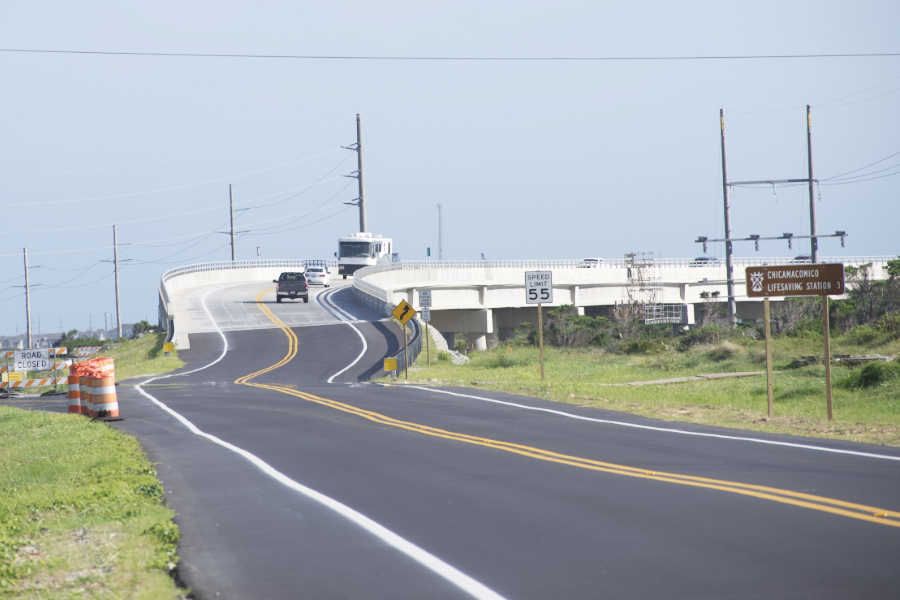 After writing about the surprise opening of the Jug Handle Bridge, well, we figured we would take a trip down to Rodanthe and see what $154 million got us.

It got us a lot and one heck of a nice bridge.

After years of riding on the edge of the Atlantic Ocean along the S Curves just north of Rodanthe, it’s a bit strange to bypass the area altogether. But that is what the Jug Handle Bridge does.

There’s sort of a gentle curve as NC12 approaches the bridge and suddenly you're over Pamlico Sound.

Driving south, looking out to the west, the vast reach of Pamlico Sound is apparent. It’s the largest sound on the East Coast covering around 2400 square miles. From the bridge, the only thing to be seen is water; land cannot be seen.

Coming off the bridge there’s a traffic circle. Living here we avoid driving on Saturdays and Sundays during the summer—that’s when our visitors are arriving or heading home, so it’s pretty hectic. So we can’t say for certain how well that traffic circle did in its first test. What we can say, though, is it works wonderfully in the light traffic we experienced.

There’s a USFW parking lot on the north end of the bridge. Paved and with plenty of parking. Worth checking out, especially the beach just over the dune. Be aware, though, it’s quite the hike over the dune…pretty steep.

The beach itself, though, we would rate as an Outer Banks hidden treasure. Soft sand and wide, it’s very nice.

Surfers probably aren’t going to be happy with losing access to the S Curves. The road between the north end of Rodanthe and the north end of the bridge is officially closed and there is no access. It will be taken up soon.

So many surprising things happening on the Outer Banks. Come and be a part of it while staying in a Brindley Beach Vacations home.