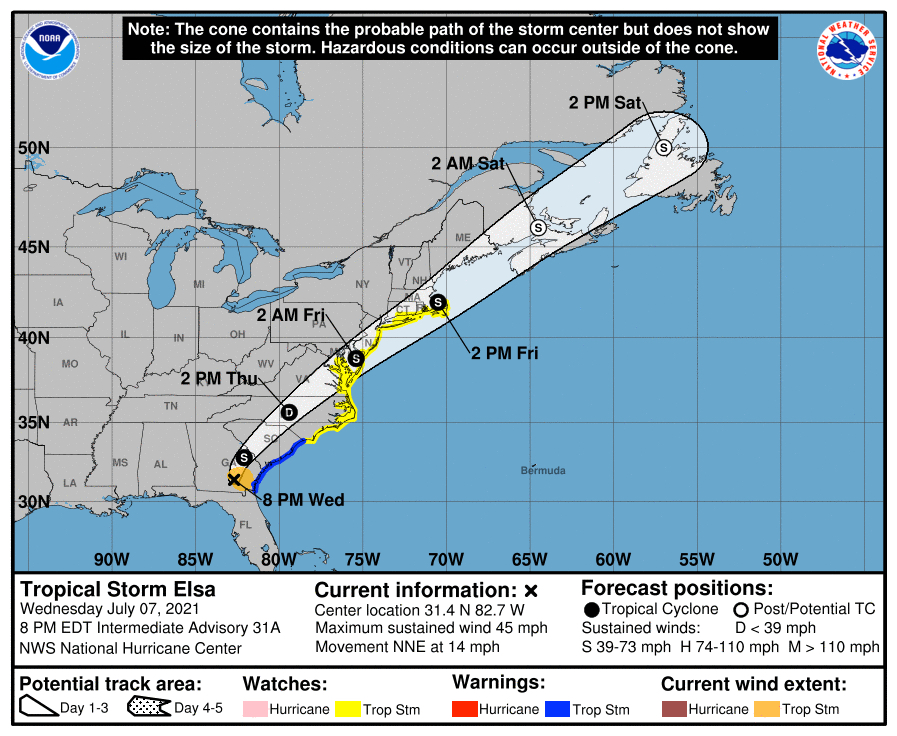 The predicted storm track for Elsa has remained fairly consistent over the past few days. It wiggled a bit to the east, then to the west, and currently the track will take the system over central North Carolina.

If that track holds, the impact on the Outer Banks will be minimal. There will probably be some wind later in the day tomorrow, although the current National Hurricane Service forecast reads, “Below tropical storm force wind—Peak Wind Forecast: 20-30 mph with gusts to 35 mph.”

That’s a windy day, but certainly not unheard of on the Outer Banks.

The current prediction is that the center of the storm will pass over Raleigh, the state’s capital has a more robust forecast than the Outer Banks. Central North Carolina is under a flash flood watch with 1”-2” of rain expected.

That’s more than any other place on the Outer Banks. Corolla, near the Virginia border, will probably get more rain than Kitty Hawk, Kill Devil Hills or Nags Head.

Looking at the storm track there will be two things happening that will contribute to that.

As Elsa tracks to the northeast, the eastern edge of the circulation will be over the Atlantic Ocean and it will brings some moisture into the storm allowing for a minimal strengthening.

Given the current track, it’s doubtful if Corolla will experience tropical storm force winds, but there will be more rain than places to the south.

Never a dull moment on the Outer Banks. Stop by for a visit in a Brindley Beach Vacations home to see what it’s all about.