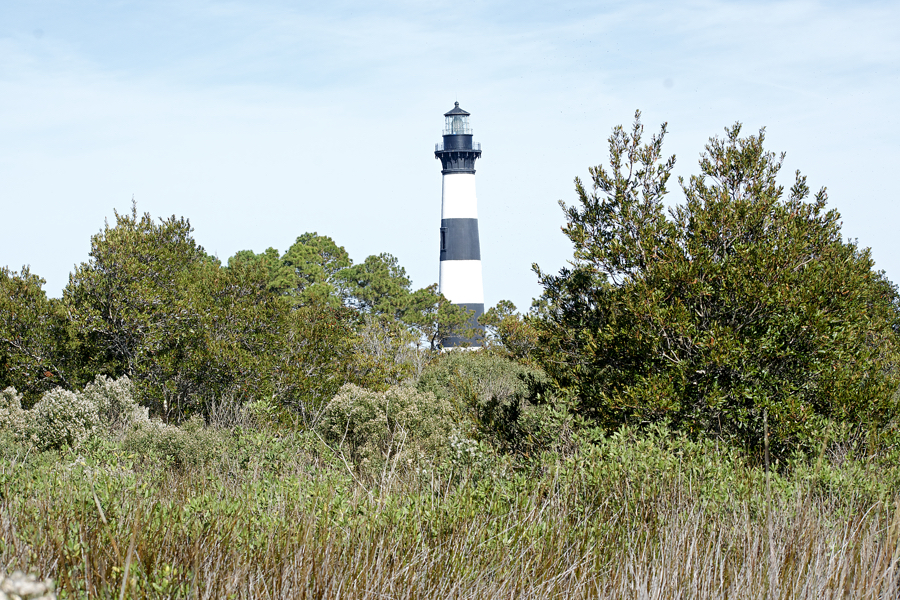 We have front that’s going to be rolling in tonight on the Outer Banks—the same system that’s going to bring rain and cooler temperatures to the Eastern Seaboard from Wilmington, NC and north.

But it’s been a wonderful fall until now with mild temperatures and plenty of sunshine.

Knowing the sunshine and 7a degree days are soon to be a thing of the past, we took a camera and headed out to Bodie Island Lighthouse in South Nags Head.

The lighthouse itself is a beautiful structure, but what creates the appeal on a day that is perfect to be outdoors are the surrounding trails and grounds.

There is a great boardwalk that leads to a gazebo overlooking the marsh that surrounds the lighthouse. In the fall, it is a fantastic place to get a good look at the migratory waterfowl that cover the waters of the Outer Banks.

The wind was blowing toward the gazebo when we were there, so the wildfowl were farther out in the waters, next to a reed covered island about 200 yards away. Still, though, the pure white of snow geese was easily seen among the rafting coots.

There is a trail on the south end of the parking lot that offers a wonderful chance to experience the marsh.

It starts as a dirt road, and that road leads back to small dock at Blossie Creek. That’s an interesting walk, but the more fascinating trail is the that heads off to the left after the bridge that crosses a canal on the way to Blossie Creek.

This trail parallels a canal for about a half mile and leads into a remarkably dense if small maritime forest. Birds are constantly flitting thought the branches. At this time of the year there are a lot of yellow-rump warblers and song sparrows. If the wind is right, there will be some waterfowl in the canal…although if they hear a human coming, they’re likely to take flight.

It’s a wonderful and very easy walk. Recommended to everyone.

So much to explore on the Outer Banks. Be sure to take some time to take in the natural beauty of one of the most extraordinary places on planet earth. Your Brindley Beach Vacations home is the perfect headquarters for you time of discovery.