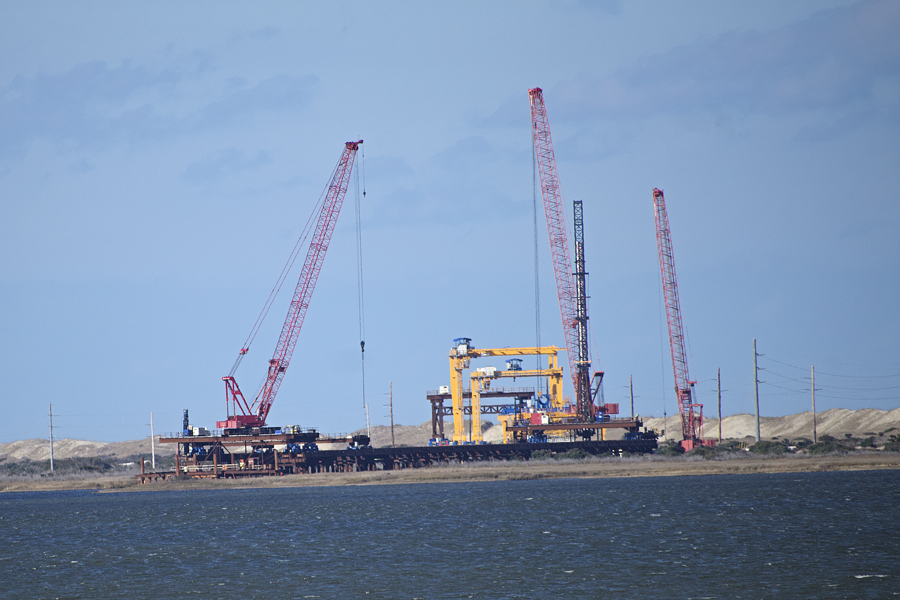 North met south on Wednesday this week when the south side of the Jug Handle Bridge  at Rodanthe met the north end coming from Pea Island National Wildlife Refuge. It may not have quite the historic significance as the May 10. 1869 driving of the golden spike at Promontory Point, Utah, but for everyone familiar with NC12 along Hatteras Island, it’s a pretty big moment.

The Jug Handle Bridge is a $145 million dollar 2.4 mile long bridge that will bypass the S Curves north of Rodanthe. The S Curves are ground zero of one of the most dynamic shoreline areas on the Outer Banks and ocean geologists have made it clear that trying to preserve that stretch of beach and road will be prohibitively expensive and will probably fail anyway.

The bridge is not open yet. There is still a lot of work to be done. the plates have to be placed that will support the subhead that will allow the road surface to be placed. There’s a good three to five months of work left.

When completed the bridge will completely bypass the S Curves, curving out into Pamlico Sound in Jug Handle shape—hence the name. It will reconnect with NC12 just north of the emergency ferry dock in Rodanthe.
NCDOT estimates the bridge will open in late winter of this year or early 2022.

Right now the road is kept open by nourishing the beach at the S Curves. However, unlike other nourished beaches, the S Curve beach is so dynamic it will require nourishing every other year, and even then the highway is subject to overwash during storm events. Typically a nourished beach needs to be maintained once every five to six years.

The original estimate for the bridge to be completed was earlier this year, but weather and COVID pushed that timetable back.

The Outer Banks is a place of constant and dynamic change. Come watch the seasons come and go on this sandbar by the sea in a Brindley Beach Vacations home.