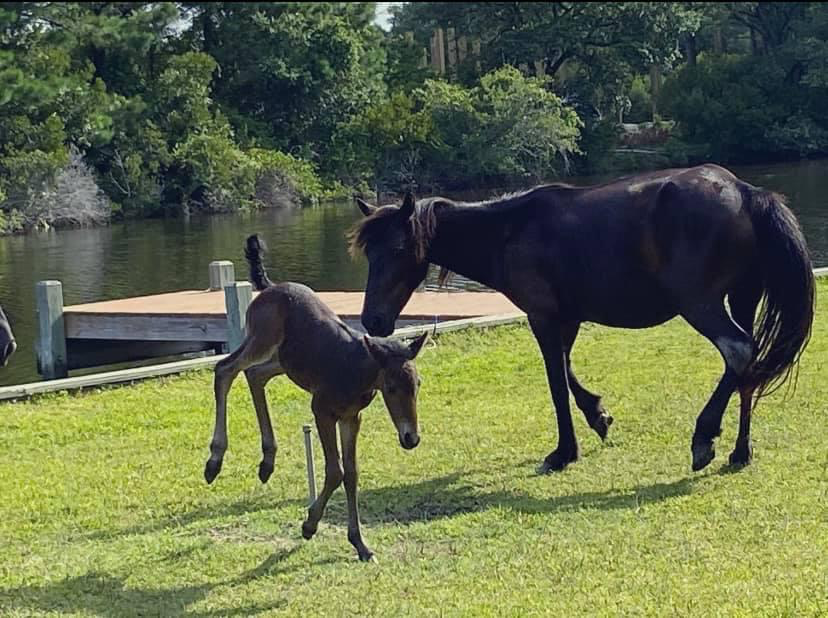 There’s good news and sad news from the Corolla Wild Horse Fund, the folks who manage the wild hoses of Corolla.

There’s a new filly in town—or in this case Carina which is yeh whole 11 miles of 4WD area north of Corolla. The new filly’s name is Beatrice, ands she seems to be doing really well, although there have been some struggles.

For some reason right after she was born she and her mother didn’t bond immediately and it took a few hours before she began to nurse. But mom and daughter figured it out she was quickly becoming a healthy young filly.

Maybe too healthy because evidently she went exploring and ended up in a canal. Luckily the local fishermen were right there to pull her out of the water. It would not have ended well if they had not been there.

And now for the sad news.

A couple of weeks ago we reported that a healthy mare, Lizzie, had a leg infection and had to be removed from the herd in the hopes that she could be saved.

She was taken to the NC State Veterinary School, one of the preeminent large animal schools in the nation.  Unfortunately in spite of what the CWHF described as “aggressive treatment,” it was clear the infection was spreading and Lizzie was in considerable discomfort and stress.

Last Friday, at the recommendation of the CWHF vet a NC State team, the decision was made to euthanize Lizzie.

There are two offspring from Lizzie that will carry on her story—Rabbit and Alex. Both were fostered with other mares, although Rabbit is old enough to be on his own.

It is sad news, but it has been a good year for foals this year so the herd is slowly growing.

There is so much to learn about the Outer Banks. Spend some time with us at Brindley Beach Vacations and discover life on a sandbar.