Having fun with Classical Music 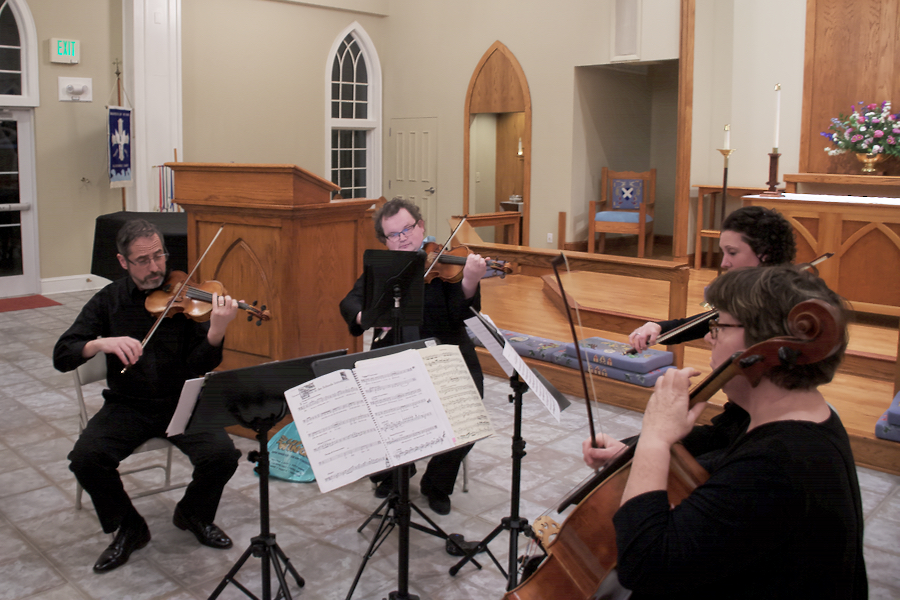 The Bryan Cultural Series has done a lot to bring great music—classical mostly—dance art, lectures, just about everything that will challenge creativity in the arts.

What the Series brought to St. Andrews by the Sea in Nags Head tonight was something truly different from what has been performed in the past.

Classical music is certainly their forte, and with the North Carolina String Symphony performing, that was the focus…but with a twist.

The Quartet has been traveling to Outer Banks elementary schools, introducing kids to classical music and classical instruments, and that continued tonight. It didn’t matter that 90% of the audience were adults, they put on much the same performance that has been presented to the schools.

There were about two dozen kids from the Hatteras Island Community Strings on hand, so there were children in the audience, but that didn’t seem to be the main reason the performance highlighted what the quartet does in schools.

What it seemed to come down to is that it’s fun.

They did perform more complete selections than would typically be played for an audience of elementary age children. Most of what they played, though, were a single movement from compositions that typically have three or four. The began the evening playing the first movement of Beethoven’s String Quartet No.1, Op.18, Allegro con brio, but did not play the other three movements from the piece.

When they played Mozart’s Divertimento in F Major, all three movements were performed. For the last movement, Presto—a bit of fun. The movement is a rondo, meaning the melody line keeps coming around and with the Hatteras kids in the front row, told the young students to listen carefully for the melody and keep count of how often the melody reappears in the movement.

The lucky student who had the right answer, became the hat girl for Ravel’s String Quartet in F major, Asses vif—tres rhythm, as the lead player shifted among the quartet. Her job was to place the hat on the lead player.

The music, as expected, was sublime, but there was so much more fun to be had in how it was presented in this case.

The Outer Banks offers something for everyone. Stop by for a while and take part in the Outer Banks experience while staying in a Brindley Beach Vacations home.