It Takes a Village to Save a Turtle 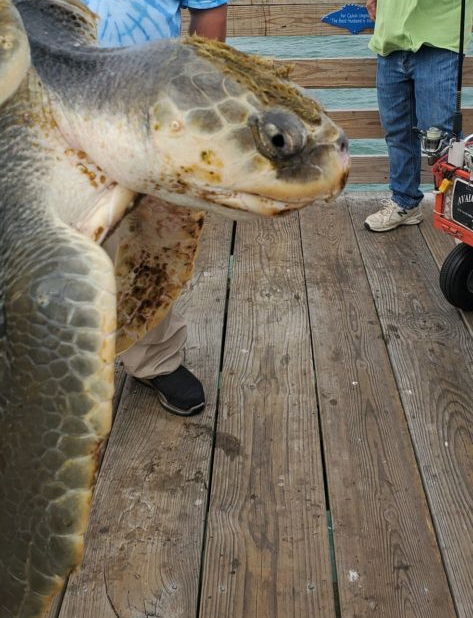 It seems as though it takes an Outer Banks village to save a sea turtle—at least that’s the conclusion after a 70 pound juvenile Kemp’s Ridley Sea Turtle was saved at Avalon Pier.

Yesterday, Friday, an angler at Avalon Pier noticed a sea turtle struggling in the surf. Knowing the best way to help the turtle was to contact N.E.S.T. (Network for Endangered Sea Turtles), the Outer Banks organization that has been saving the tulles for over 20 years.

When the folks from N.E.S.T. got on the scene the turtle wasn’t quite close enough to the beach to go and get it. They asked the people on the pier if they could use a drop net to get the turtle.

By this time the turtle was circling the pier, but did not seem to have the strength to get back out to sea, as it was dragged in and pushed out by the waves and current. It took a while, but finally Kevin—that’s who N.E.S.T—identified got the net on the turtle and with some help brought young turtle to shore.

The turtle, now named Avalon, is is being cared for at the Sea Turtle Assistance and Rehabilitation (STAR) Center at the North Carolina Aquarium on Roanoke Island.

Kemp’s Ridley was first identified as a unique species in 1906. At one time it numbered in the thousands, living and nesting primarily in the Gulf of Mexico. However, from the late 1940s to the 1980s its number fell precipitously and the species is considered endangered. There have been some hopeful signs of recovery, but Kemp’s Ridley sea turtles have a long road to go before they are considered no longer endangered.

Although the they primarily mate and nest in the Gulf of Mexico, juvenile Kemp Ridley’s are often seen along the Eastern seaboard. It is considered the smallest of the sea turtles.

There are so many reasons to visit the Outer Banks and explore our beaches. Take a week or two and unwind in a Brindley Beach Vacations home.