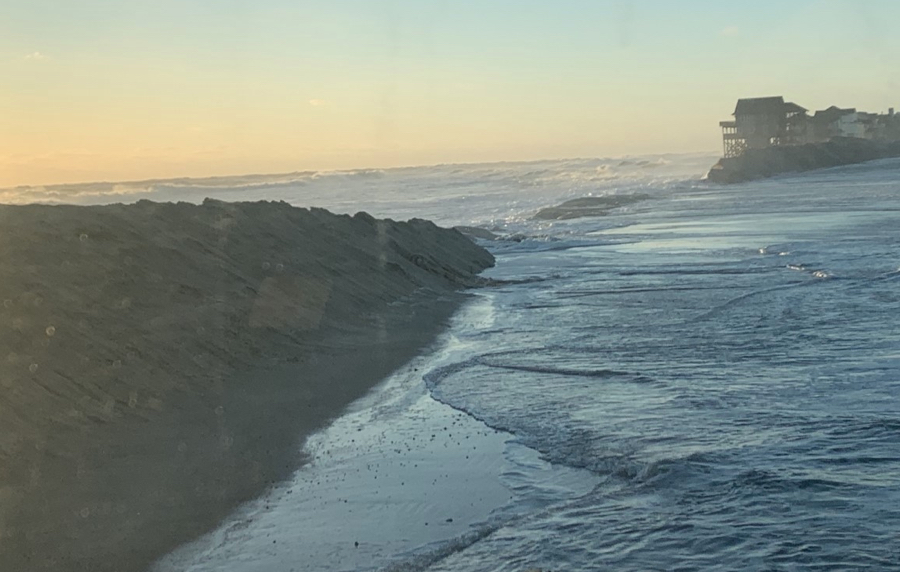 The Jug Handle Bridge that will bypass the S Curves just north of Rodanthe should be open by late February or early March. It’s a little bit weather dependent, but that’s a good guess.

We just had a great example of why the bridge is so necessary.

Right after the New Year we had a storm roar through—the same one that devastated northern Virginia and snarled traffic for hours on I-95.

We didn’t have any snow, nor anything close to what they experience, but the winds were hailing with gusts around 70 to 80 mph. It churned up the ocean and the waves pounded through the dunes that line NC12 just north of Rodanthe.

For a day and a half, the road was impassable with ocean water flowing across the road. Breaching the dunes has become more a more frequent over the past two to three years. Even though NCDOT is really good at clearing the road, it has become increasingly clear that it is just a matter of time before all efforts will fail.

Because that section of beach is part of Pea Island National Wildlife Refuge, there have been questions asked about access when the bridge does open.

According to US Fish & Wildlife officials there will be access. In some way, in fact, as the plan they have in place moves forward, there will be better access than there is now, although there will not be a road any longer.

However, on the north end of the bridge, there is a staging area that has been used for construction vehicles. That staging area—which is quite large, will be paved and for use as a parking lot. Access will still be permitted, although it will be on foot.

The beach itself is part of Cape Hatteras National Seashore, so off-road driving will be their decision to make.

The Outer Banks is beautiful at all times of the year. Stop by for a winter or spring visiting and plan your stay in a Brindley Beach Vacations home.