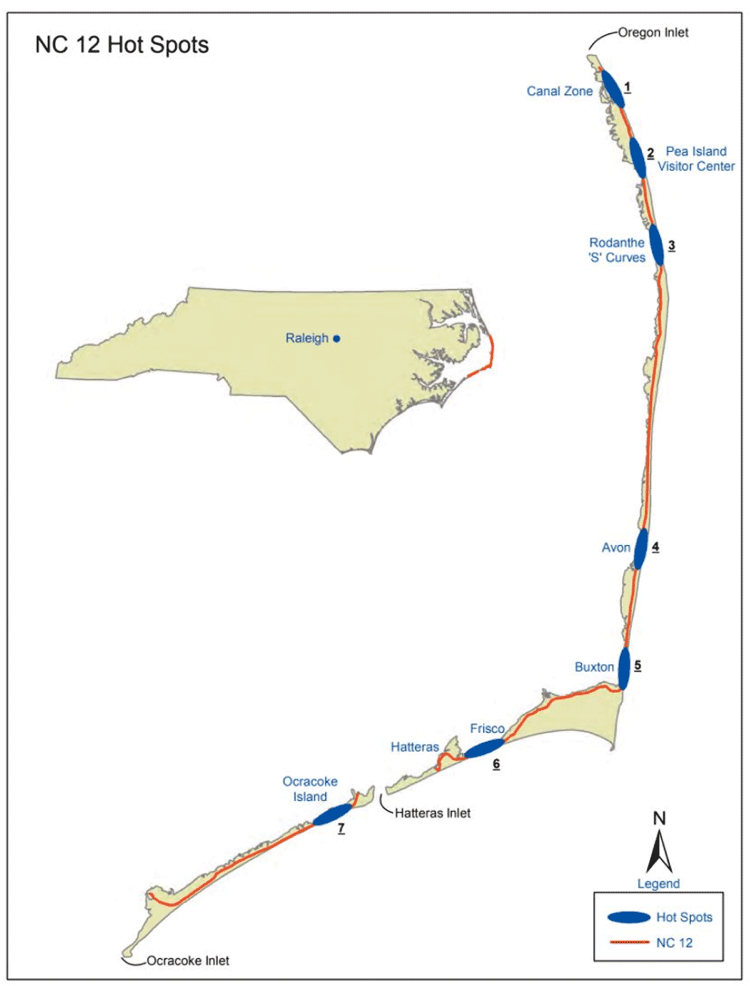 Keeping everything connected is one of the ongoing challenges on the Outer Banks—and it’s becoming more challenging as time goes on.

That became clear at a recent meeting of the NC12 Task Force.

The Task Force brings together officials from Dare County, Hyde County, NCDOT, the Southern Environmental Law Center (SLCC) and a number of other government organizations to look at what the best options will be for keeping NC12 open in  future.

NC12 is the thin ribbon of highway that connects Hatteras Island—part of Dare County—and Ocracoke, Hyde County, with the rest of the world. The road is subject to frequent overwash from the Atlantic Ocean and sometimes from Pamlico Sound. But as the only link to a permanent population of 5000-6000 and hundreds of annual thousands of visitors, keeping the road open is vital to local economies and a way of life.

But keeping the road open will call for some innovative thinking. Seven hotspots have been identified between where the Marc C Basnight Bridge exits on Hatteras Island and the north end of Ocracoke. However, one of those hotspots is being resolved as the Jug Handle Bridge bypassing the S Curves north of Rodanthe will be open by summer of next year.

That bridge, though, highlights some of the complexities in keeping that vital link open. The bridge, approximately 2.5 miles long, will cost $256 million to build—approximately $74 million per mile.

The bridge has a planned lifespan of 100 years and is well out into the sound, which is why it is so expensive. But in conversation among the stakeholders at the last meeting, stakeholders with scientific backgrounds were skeptical if building a bridge in place—think of it as raising the existing roadbed with a bridge—would be suitable solution.

Although the upfront cost would be considerably less, building in place would call for an almost endless series of replacement spans and at some point in time no matter what, the road would have to be moved into the sound.

The task force has no authority to raise funds for construction. What it is accomplishing, though, is getting stakeholders that are often at odds on how to proceed with Outer Banks road projects in the same room to see if consensus can be reached before a project begins.

The Outer Banks is a beautiful and dynamic place to visit. Stay a while with Brindley Beach Vacations and explore a world like no other.