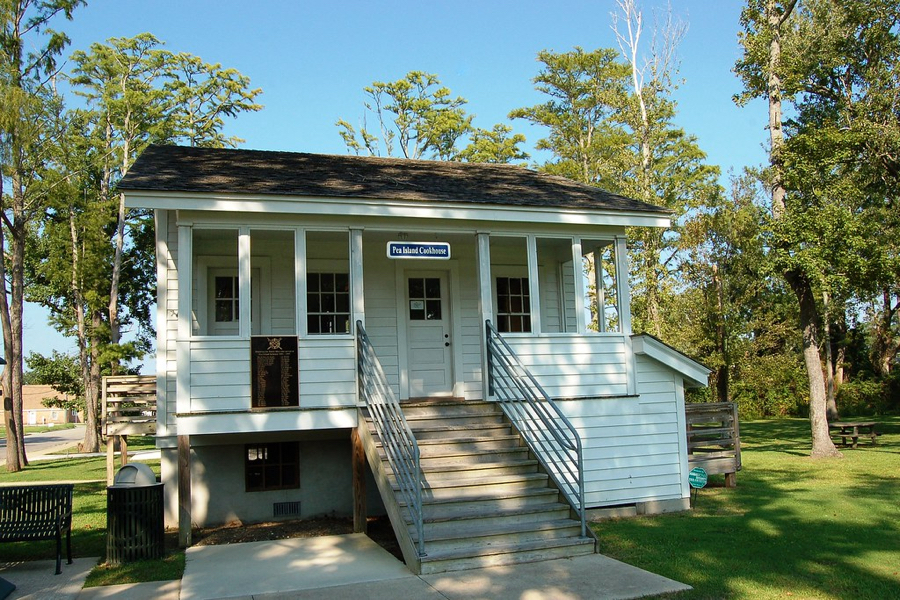 The Cookhouse Museum in Manteo is the latest museum to open on the Outer Banks and it took a while to get to where it is today.

Located across old US 64, it’s a little bit tucked away and a little bit hidden, but it’s a museum with very real relevance to the story of the Outer Banks.

The museum pays tribute to the crews of the Pea Island Lifesaving Station.

The Pea Island Lifesaving Station is no longer manned—the cookhouse for the station is the museum, moved from a temporary home in Rodanthe to Manteo.

The Pea Island Lifesaving Station was crewed by an all Black crew throughout its history. It first opened in 1880 and was decommissioned in 1947. The professionalism and competence of the men who manned the station is legendary.

The first  captain of the Pea Island Station was Richard Etheridge, born enslaved on Roanoke Island he rose to the equivalent rank of master sergeant in the Union Army. Returning home to Manteo, he divided his time between fishing and working for the nascent Lifesaving Service, the predecessor to the US Coast Guard.

Because he was Black, he could only be on station at the lowest rank…surfman #6. His competence and leadership were noticed, however, and Sumner Kimball, the supervisor of the Lifesaving Service, recognized Etheridge’s skills and promoted him to Captain of the Pea Island Station.

Knowing that white men wold not serve under his leadership, Kimball assigned an all Black crew to the station.

Etheridge was legendary for the incessant drilling and attention to detail that he demanded. It all paid off on the night of October 11, 1896, as the three-masted schooner, the E.S. Newman was foundering in the waters off Pea Island in a hurricane. The bravery and resourcefulness of the surfmen was astonishing and included swimming through hurricane seas to rig a lifeline to shore.

It took 100 year for the well-deserved Gold Lifesaving Medal to be awarded to the dependents of the the crew, but in 1996 the medal was awarded.

The museum houses artifacts from the Lifesaving service as well as the sign board from the ES Newman.

So much to discover on the Outer Banks and so little time. Make the time to begin the journey of discovery with a week or two in a Brindley Beach Vacations home.