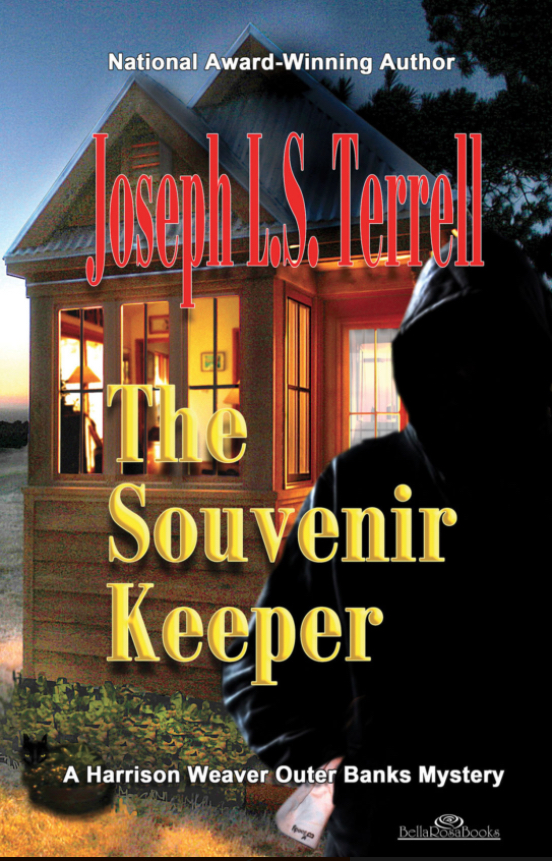 Now 91 years old, Joseph’s novels are like mini tours of the Outer Banks, with place names, a few real people in them and a real sense of what the Outer Banks feels like…except for the murders.

Because of as many people met their fate at the hands of criminals as die in the Harrison Weaver novels, the Outer Banks would be known as the murder capital of the United States.

Not that his books are filled with gore and violence. Quite the opposite actually, Some of the descriptions can be startling and a bit graphic, but Terrell is an excellent author and he understands that the plot is what moves the story along, not pages of graphic descriptions of violence.

In The Souvenir Keeper the evidence suggests a serial rapist and murderer is lurking on the Outer Banks. What follows are the Harrison Weaver cast of characters—the County Sheriff and Deputy Sheriff who are top notch investigators. There’s “Balls”—Ballsford Twiddy—special investigator and friend of Weaver.

It all makes for a great read. The characters are believable, the plot moves along an almost breakneck speed; the writing is first rate. All in all, all of Harrison Weaver books are great beach reading material or just a fun read when its time to relax.

In addition to the nine Harrison Weaver mysteries, Terrell has published six other novels. Not all of his books are mysteries. His novel Learning to Slow Dance is a beautifully crafted coming of age story taking place in the Raleigh area after WWII.

The Outer Banks is indeed a place of mystery. Come discover an unknown world with a stay in a Brindley Beach Vacations home.