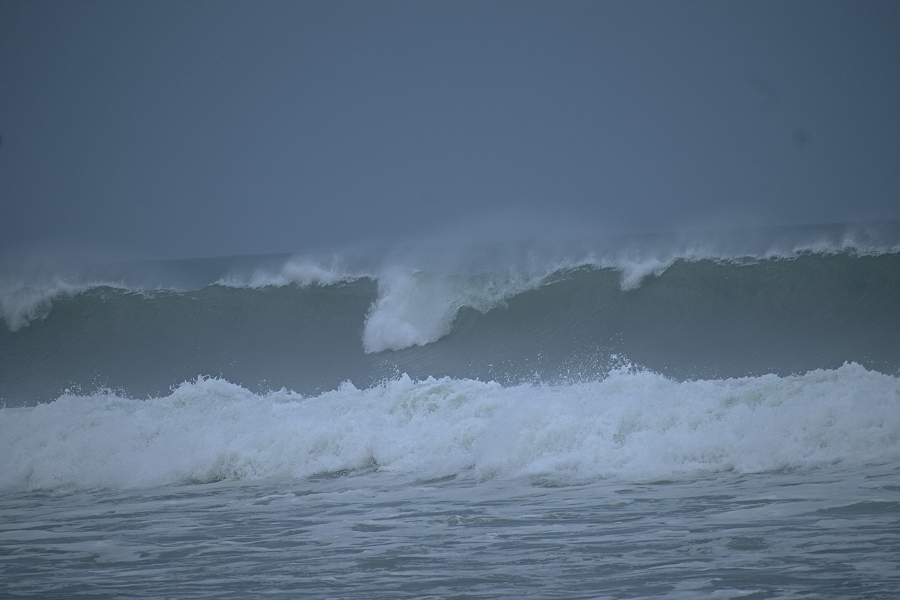 Surfers it’s time to grab your short boards and hit the beach. Hurricane Larry is somewhere to the northwest of Bermuda just about now and the waves have been rolling in for the past two days.

It looks like 4’-6’ waves through tomorrow. Saturday doesn’t look too bad either with 3’ waves in the surf zone, but right now, Friday looks to be the better day.

The big question on conditions is going to be wind direction and the wind has not been cooperating all that much. The wind shifted to the northeast today, and a northeast wind on the Outer Banks tends to created pretty choppy conditions.

Still there were a few boards on the water and some good rides.

The break was pretty far from the beach—probably a good 75 yards off the shoreline, so paddling out took a while.

The waves were kind of choppy, but there was a lot of power in them. Catch the right wave and it was one heck of a ride.

There is another tropical system offshore right now in addition to Hurricane Larry. Tropical System Mindy is in the Gulf Stream east of South Carolina and heading east northeast and out to sea. It’s possible that we’ll get something from Mindy as well, although there is not nearly as much power in Mindy as there is in Larry.

Best bet for waves from Mindy will be down on Hatteras Island south of Buxton or Ocracoke.

For surfers, fall is often considered the best season of the year on the Outer Banks. As tropical systems move north along the Atlantic, they often generate straight-line waves that hit Outer Banks sandbars and create spectacular rides. Probably not the best time for beginners, but surfers with a little experience on a board will have a great time.

The Outer Banks in the fall is an amazing place to be. Bring yourself and your family to this sandbar by the sea and take the time to enjoy life in a Brindley Beach Vacations Home.