A Great Day of an Outer Banks Triathlon 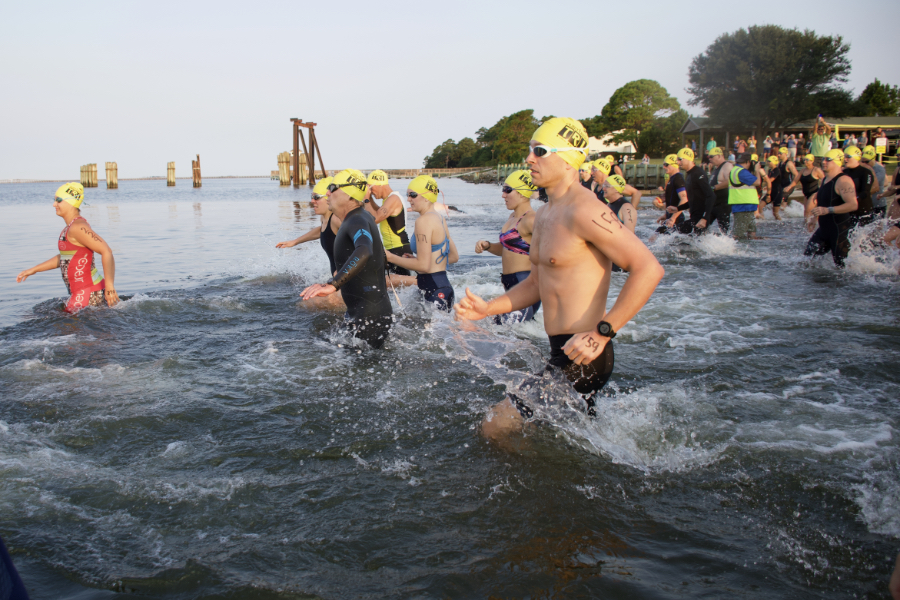 The weather was about as good as it could have been for the 2022 Outer Banks Triathlon today. The Water temperature at the Old Swimming Hole by the Dare County Airport was cool—in the mid 70s—the sun was bright—near perfect conditions.

The Olympic swimmers got in the water about 7:15, their course taking them out into Croatan Sound. A few minutes later it was the Spint racers turn.

Once out of the water, it was a beautiful course. The bike ride took competitors across the Manns Harbor Bridge to Manns Harbor and then back again. The bridge was closed to car traffic for the event.

The bike drop-off was at Dare County Airport, where swimmers got on their bikes. From there runners picked up the Roanoke Island multi-use path to Fort Raleigh National Park. The path is nicely shaded, something a number of runners commented on.

The finish line was in the parking lot for the Lost Colony theater.

A number of the competitors commented on how well laid out the course was and how helpful the volunteers were. There was also consensus that the wind was its own hazard on the bike ride, even though the wind, by Outer Banks standards wasn’t very strong today.

Participants came from all over the country, from as far west as Utah and Oklahoma, even though there were not as many competitors as in the past. Most of that is after two years of COVID restrictions, things are just beginning to pick up again.

There is so much to do on the Outer Banks. Come join the fun when staying in a Brindley Beach Vacations home.