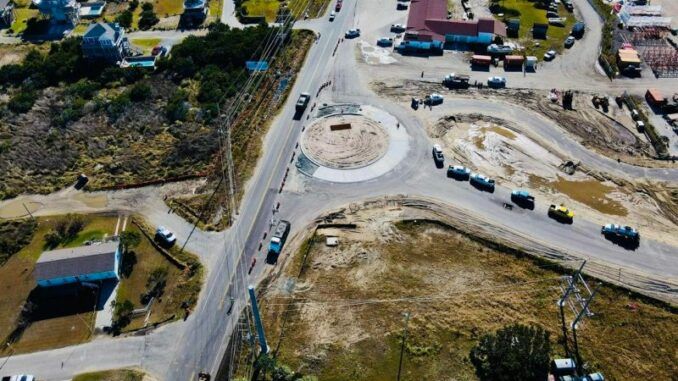 Driving along NC12 at the S Curves it’s pretty clear that the Jug Handle Bridge that will bypass one of the most troubled spots along the highway is nearing completion. We just got a concrete sign that things are moving along as they are supposed to.

The plans for the bridge always called for a traffic circle at the north end of Rodanthe where the bridge would rejoin Hatteras Island after taking a 2.4 mile journey into Pamlico Sound.

NCDOT determined that keeping the S Curves, NC12 just north of Rodanthe, open would be either too expensive or simply not feasible. After the Jug Handle Bridge is completed, NCDOT will no longer maintain the area.

There is some question about how access will be maintained to Pea Island National Wildlife Refuge.

From the first planning stages of the Jug Handle Bridge project, highway engineers felt a traffic circle was the best—probably only viable solution. Although a traffic light was considered, experts pointed out that in the summer any time traffic is stopped, there is a ripple effect that far exceeds the cars actually at the light. The feeling was that a light at that intersection would cause traffic to back up on the bridge and coming from the north and snarl traffic coming from the south.

Currently there is no access to the bridge—it’s not completed yet so it would be dangerous and a road to nowhere.

The bridge was built from the north and south sides. The two sides met in early September. Since that time decking and the road surface are being applied. If all goes as planned, and things seem to be moving along well, the bridge should be opening in early 2022.

The Outer Banks is an amazing place to visit any time of the year. See what winter has to offer in a week or two at a Brindley Beach Vacations home.